Teen Volleyball Player Back on Court 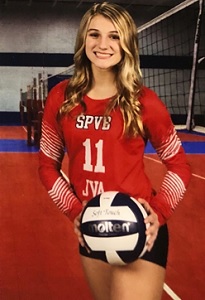 My name is Avery Searls and I have been playing volleyball for six years of my life. About a year and a half ago, I was 13 and in 8th grade, I started having severe hip pain. Playing volleyball was very difficult and I could barely even walk. I went to many doctors, and I was told that all I needed was physical therapy. But after about 4 months of PT, my hip only got worse.

Finally, I found Dr. Nho, who diagnosed a labral tear and impingement in my hip. I had surgery in April of 2019. During my recovery, it was hard at first, but I kept up in physical therapy and training myself so I could go back to volleyball. My hip became stronger after many months of working on it and returning to volleyball came faster than I ever thought would happen. After being in pain and not being able to play volleyball for eleven months total, six months after my surgery, I was finally able to return to volleyball.

Now, a year and a half later, I am 15 and in zero pain. I am 100% back to volleyball and have never felt better. I am so thankful for Dr. Nho and everyone who has helped me to return to volleyball and being an athlete again!