Athlete of the Month – Koray Yesili 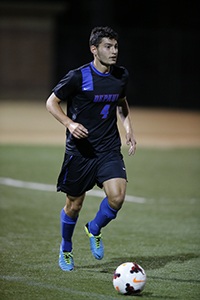 Koray Yesili is a 23-year-old graduate student from Berlin, Germany who plays defense for the DePaul University men’s soccer team while pursuing a master’s degree in finance.

His love of soccer started at the age of four when his parents encouraged playing sports as a great way to stay active. Today, he says the three most important things in his life are: family, school and soccer.

In December of 2013, during the off-season, he was out for a training run when suddenly his knee gave out. Even walking was difficult.

Right away, he consulted with Dr. Shane Nho, the team physician for DePaul University athletics and sports medicine physician at Midwest Orthopaedics at Rush. After a careful evaluation, Dr. Nho diagnosed Koray’s anterior cruciate ligament (ACL) tear and scheduled him for surgery. Dr. Nho and Koray agreed that it was important to get on the road to recovery in order to return to soccer as soon as possible. They had a great chemistry and the same goal: get Koray ready for the start of the 2014 season.

After surgery, Koray underwent a regimen of physical therapy and worked hard on his rehab and keeping his spirits up while his teammates trained.

Today, he has been cleared to play and is happily back playing soccer again for the Blue Demons. So far, he has started in five games and played in six.

He is grateful to Dr. Nho for the excellent care he received and the ability to continue to play soccer competitively. He aspires to continue his soccer career at the highest level possible and would love to play professionally if the opportunity arises. He says that no matter where his soccer career goes, he would always like to stay involved in the sport in some way.

Koray’s attitude towards his recovery and his aspirations for the future are why Koray is this month’s Midwest Orthopedics at Rush Athlete of the Month.