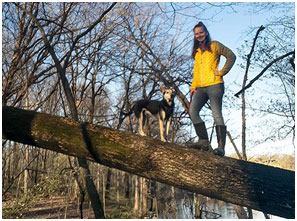 As seen on www.rushortho.com/patient-story/hip-specialists-partner-to-correct-adults-hip-problems Shortly after she was born, Erin Roark, 37, of Valparaiso, IN, was diagnosed with a birth defect called hip dysplasia during a routine well-baby visit. This is a condition in which the femoral head (ball) of the hip joint does not fit properly into the acetabulum (socket). Hip dysplasia affects approximately 2-3 children per thousand but is four times more common in girls than in boys.

Her pediatrician prescribed soft braces which today is still the most common first line of defense to help babies’ hips develop normally.

However, as Roark grew and she became active in sports like swimming, gymnastics, and dance, she began to hear a ‘clicking’ which escalated into hip discomfort and pain. Over time, it became hard to play sports, so she went to see a local orthopedic physician.

“He confirmed that my dysplasia was the problem and predicted that I would need two hip replacements before I was 40,” she explained. “At that point in my life, 40 seemed like 1,000 years away.”

Roark learned to live with the pain and gradually developed a limp. Time went on.

At age 35, while working at home, she experienced pain in her hips which caused her to faint. Scared, she contacted a local orthopedic physician once again. “He basically told me to come back when I couldn’t walk,” Roark said. “That wasn’t OK with me, so I started doing research.”

“When I saw the extent of her condition on an MRI, I pulled in my partner Dr. Williams so that we could blend our skills to give her the best outcome,” explained Dr. Nho.

Dr. Joel Williams is a specialist in both hip surgery and orthopedic trauma. He has a comprehensive skill set which includes a procedure called a periacetabular osteotomy (PAO) to treat hip dysplasia. With Dr. Nho correcting Roark’s labral tears and Dr. Williams correcting her hip dysplasia, they were confident they could treat her multiple conditions without hip replacements at this stage in her life.

Roark underwent four surgeries. First, Dr. Nho performed a hip arthroscopy on her left hip to her repair labral tears and FAI, then two weeks later Dr. Williams performed a PAO on the same hip. Ten months later, the physician team performed the same surgeries on her right hip. “I was mentally ready to get this done,” Roark explained.

Post-surgery, she performed physical therapy for four months on each side.

“She was older than most patients who undergo this type of surgery, but she has had no complications or issues,” Dr. Williams said. “I’m really enthusiastic about how well she is doing.”

“I HAVE NO REGRETS,” SHE SAID. “I AM MOSTLY PAIN-FREE NOW, AND I HOPEFULLY WILL NOT NEED HIP REPLACEMENT SURGERIES DOWN THE ROAD WHEN I AM OLDER.”

Today, Roark is happily working out after ten years of inactivity. She participates in barre classes, swims, and is looking forward to backpacking with her husband.