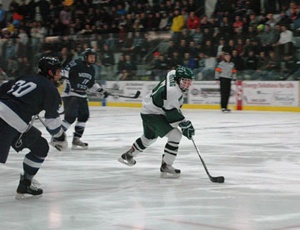 When Plymouth State University hockey player Michael Freitag, 22, of Westmont, Illinois, tore the labrum of his left hip during a workout, his future in a sport he had been playing competitively since age five was suddenly uncertain.

"I thought it was a bad pull at first," he said, "but two weeks after I started having the pain in my hip, my knee was locking up in my sleep. Being an athlete all my life and knowing my body, I knew that something was wrong."

Following his instincts, Michael sought an MRI. The scan revealed a 60 percent tear in the labrum of his left hip, a much more serious injury than the hip flexor pull he had originally anticipated.

Michael's younger brother, a high school wrestler, had previously seen Dr. Brian Cole of Midwest Orthopaedics at Rush (MOR) for an ACL reconstruction, so the Freitag family was already accustomed to the first-rate care from the specialists at MOR. When the family consulted Dr. Cole for a recommendation for Michael, he recommended colleague Dr. Shane Nho.

A former college hockey player himself, Dr. Nho was specifically well suited to take care of Michael's problem. "He was very conscientious of the fact that I was a college hockey player," Michael said. "He gave me the option to have the surgery after the season so I didn't have to miss any games."

In March of 2013, after Michael's hockey season was over, Dr. Nho performed hip arthroscopy surgery. Through a very small incision, he inserted a small camera and instruments to place three anchors in his hip to repair his labrum. He also shaved down a portion of his pelvis that was squared off, causing impingement. After the procedure, Michael was released the same day to the comfort of his own home.

Though the recovery process and physical therapy were not easy at first, Michael has made fast progress and is extremely satisfied with his progress.

"I never expected my body to be where it is now this quickly," he said. "I've been on the ice seven or eight times since I was cleared to skate, and it feels better than I can ever remember."

"Dr. Nho understood what I wanted and what my future goals are, and he took that into consideration," Michael said. "I'm feeling better than ever, and I can't wait to play on a healthy hip this season."